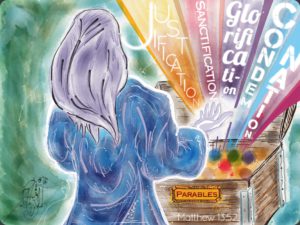 This study is about, “God’s foreknown knowledge, His predestined plans, and the creation of mankind both male and female {you/us} in His spiritual image and physical likeness and I ask you to insert yourself into the place of King David as he speaks to God so that you make the following assertions for yourself, “Your eyes saw my unformed substance {put your name________}, and in Your book all the days [of my life] were written before ever they took shape, when as yet there was none of them” and watch and learn what happens as we trace your name and life from BEFORE creation, time, and history began through TODAY.

You are here at this time in history because God the Holy Spirit was spiritually present at your parent’s sexual union to put together your mother’s right egg with the right sperm from the billions that were deposited into your mother by your father to produce you. Isaiah 41 told us that God calls forth the peoples of the generations from the beginning of Adam and Eve so I ask you to think about the impeccably accurate work to achieve this by God the Holy Spirit in the centuries since man was created.

The Bible also shares with us that God creates each person at their conception with three distinct parts – a physical body containing our bones/frame, organs, and skin which allows us to function/be mobile/to be physically alive, a soul which I believe contains one’s mind/spiritual heart and their personality, and a spirit that can connect all naturally conceived humans to the spiritual realm and to God and contains ALL of each person’s history, and then it returns to Him at one’s death to be used by God as a reference for their/our judgment:
1 Thessalonians 5:23 And may the God of peace Himself sanctify you through and through [separate you from profane things, make you pure and wholly consecrated to God]; and may your spirit and soul and body be preserved sound and complete [and found] blameless at the coming of our Lord Jesus Christ (the Messiah). AMP
Ecclesiastes 12:7 {When a person dies} Then shall the dust [out of which God made man’s {physical soul and} body] return to the earth as it was, and the spirit shall return to God Who gave it. AMP
I do not know how long God contemplated, organized, and agonized over His creation in the era before creation, time, and history began, but we MUST understand how “perfect and complete” the total creation was in God’s sight:
Genesis 1:31 And God saw everything that He had made, and behold, it was very good (suitable, pleasant) and He approved it completely. And there was evening and there was morning, a sixth day. AMP
It is guesstimated by human reproduction scientists that over 108+ billion people have been born from man’s creation and that does NOT include all of the humans that were not conceived nor born because of blocked conception and abortion. It is absolutely necessary that you understand the seriousness of God’s involvement in your life from BEFORE creation and time through the present and on into the future. God is NOT a joke nor a fluke!!! He is real!!! alive, loving, and well!!! And has conditions on your part to be involved in your/our lives!
Hebrews 13:5 Let your character or moral disposition be free from love of money [including greed, avarice, lust, and craving for earthly possessions] and be satisfied with your present [circumstances and with what you have]; for He [God] Himself has said, I will not in any way fail you nor give you up nor leave you without support. [I will] not, [I will] not, [I will] not in any degree leave you helpless nor forsake nor let [you] down (relax My hold on you)! [Assuredly not!]  [Josh 1:5.] AMP
In closing this study, we have traced man’s concept by God from BEFORE creation and time began all the way through the ages to you being present here TODAY. Our next study will be on man’s entrance into the world, but we must look at sin and its consequences to the angels, to man, and to creation to see the big picture.
AMEN and AMEN!
The Spirit of Life Part 4

You may have missed

Which Kingdom has Precedence in your Life?

The Mystery of Original Adam Revealed

14. GOD’S FOREKNOWLEDGE IMPLEMENTATION and RESTORATION OF REDEEMED MANKIND THROUGHOUT TIME AND HISTORY